The aim of the studio is to explore new ways of inhabiting “big numbers”. Under the guidance of ADIP Studio the project is developed in the three phases:
•  Research of the reference project from Japan, through the lens of Metabolism and Oskar Hansen’s theory of OPEN FORM.
•  In collaboration with FG Bürkle, the production of a narrative  and art piece for the project.
•  Designing a performative structure while using the acquired knowledge from previous two steps.
Our project is an attempt to explore the effect of the ideology on architecture. How conscious is our urban production? A history might be at the end, but how does that end reflects on our cultural output, mode of living or/and lifestyle?
With the project, we wanted to show that we do not live in a post-ideological society, but in a rather polyideological space. Instead of a rigid ideological frame, we are now free to choose more fluid and flexible system of thoughts and beliefs which would affect our production of social relations, culture and space.
We designed a set of prefabricated elements that ould be appropriated by the users to serve their ideologies. Out of these elements we anticipated the three scenarios that could be observed as an architectural stream of consciousness, exploring ideas of design approach, translation of theory in praxis, state of contemporary society and open form.
The narrative follows after the break.

NARRATIVE
OF POLYIDEOLOGIA
Entire human cultural output and production is the materialization of ideology and Plattenbau is not an exception. We could argue the level of consciousness with which the ideology is translated to architecture, but clearly, the translation was successful. If we imagine the Platten (prefabricated slabs and panels) as the vocabulary and the ideology of the German Democratic Republic as the syntax then the created language is clearly the mass production of housing units all over former East Germany. We are able to read three strongest concepts through which we can analyse GDR ideology, society and space production:
EFFICIENCY • REPRESSIVE CENTRALIZED AUTHORITY • CLASSLESS SOCIETY
Production was based on the fast and cheap production of goods that would satisfy the demand. In the construction was the same situation, production of modular elements that would be easily assembled in housing block for a couple of hundred inhabitants. The main designer, contractor and supervisor of the urban production was the state. The rule of GDR is described as repressive because many restrictions they imposed and sophisticated system of surveillance. In their strive toward the ideal classless society, political elite was trying to suppress any deviations from the model of “solid citizen”. This explains the aesthetics of the Plattenbau: generic, dematerialized and standardised living units. In other words, East Germany was example par excellence of Foucault’s disciplinary society.
Today, we live in so called post-ideological era, The end of history. Three ideas of GDR evolved in the new forms of power exercise.
ACHIEVEMENT • AUTOAUTHORITY • INDIVIDUALISM
We live in B. C. Han’s achievement society, where we are efficient in order to achieve ever more. All the panopticons are demolished and on the place shopping malls, gyms, social networks are built. We are now our own master and slave at the same time, deciding how we look, where we live, where we go, how long we work and so on. We are given the full freedom to choose from the supplied choices how do we express our individuality, only thing is how many choices can we afford.
If we take this a-ideological reality as a syntax of the contemporary architectural language and use the Plattenbau as the source of etymons for the new set of words, vocabulary, what would we be able to communicate? How would the future architecture students, sociologist or even archaeologist understand this architecture?
It is hard to give the answers on these pretentious questions, considering the fact that we designed nothing more but morphemes for the architectural language. We propose the ultimate open form, nothing more the fundamental construction elements that are open for appropriation. Nevertheless, our design comes from the desire to respond to the crises that our world is facing. Out of (informed) naivety we anticipate three speculative realities created from the appropriated elements to confront three crises: Financial crisis, envisioned as rational extension of the Plattenbau that would provide inhabitants with platform to maximize their self-enterprise and sustain their credit-driven life; Crisis of meaning, conceived as a space accumulated with metaphors, space that is in continuous process of reproducing meanings and references and Geopolitical crisis, the space that explores the possibility of informalization of Western (Northern?) urban development.
Berlin, 2015 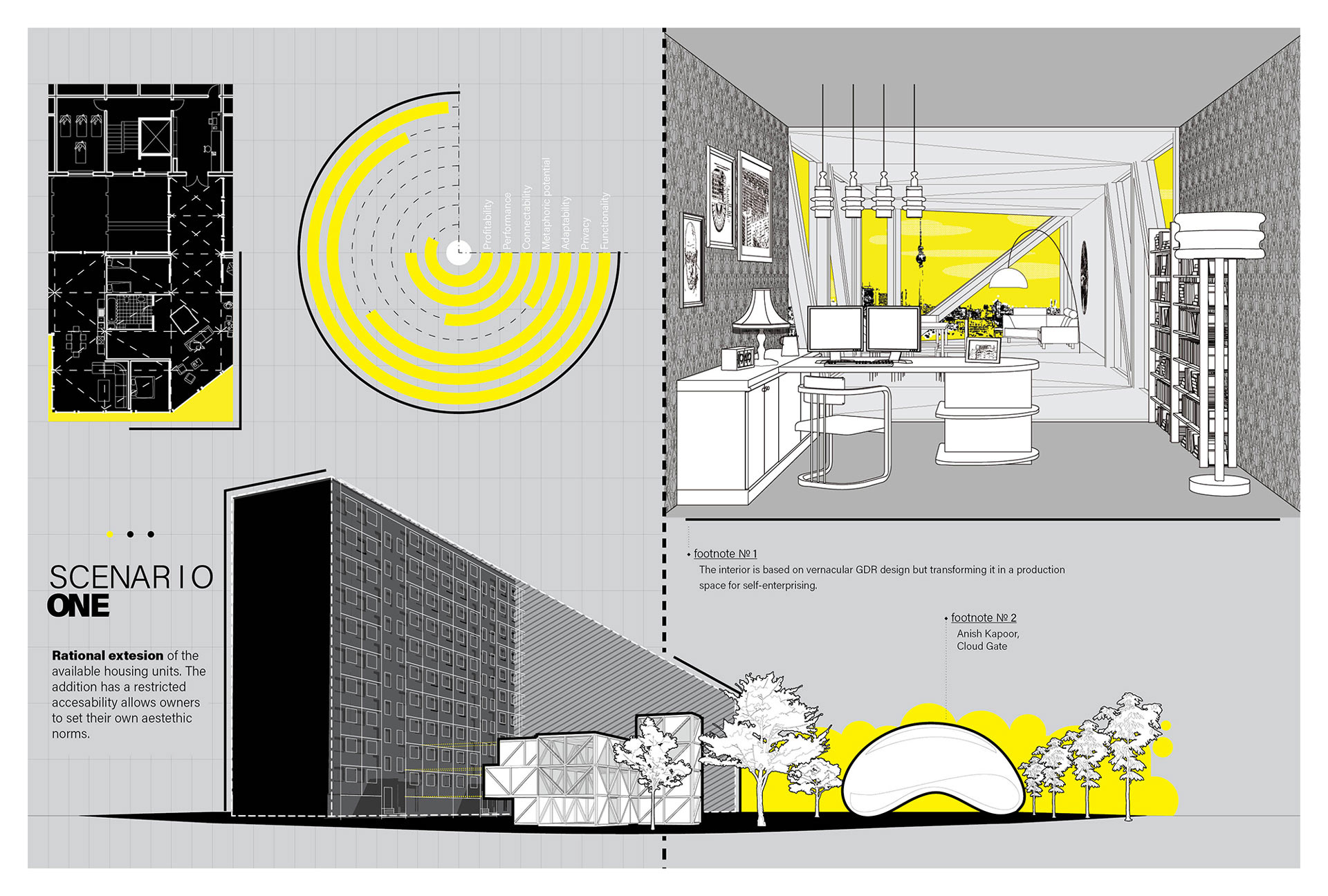 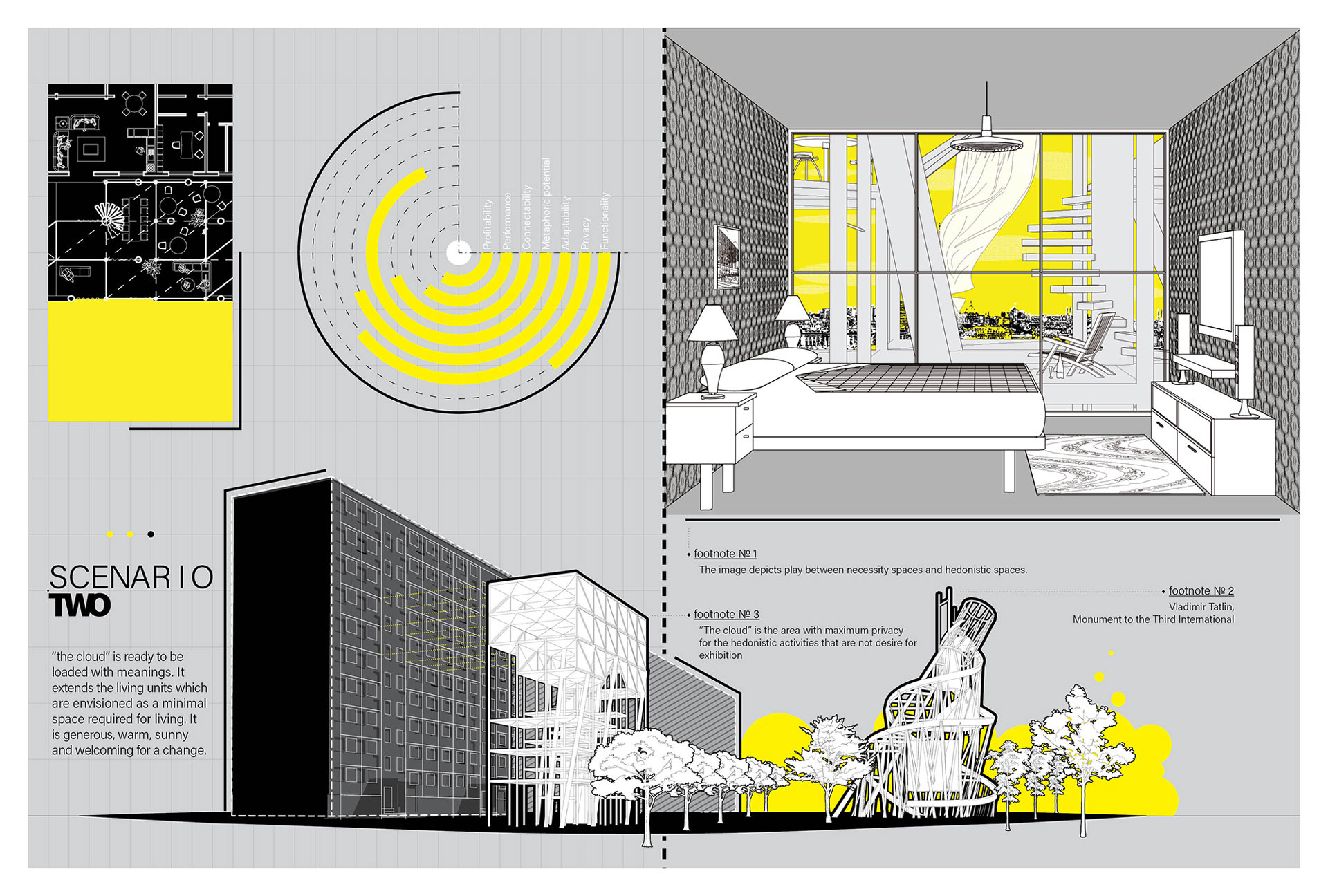 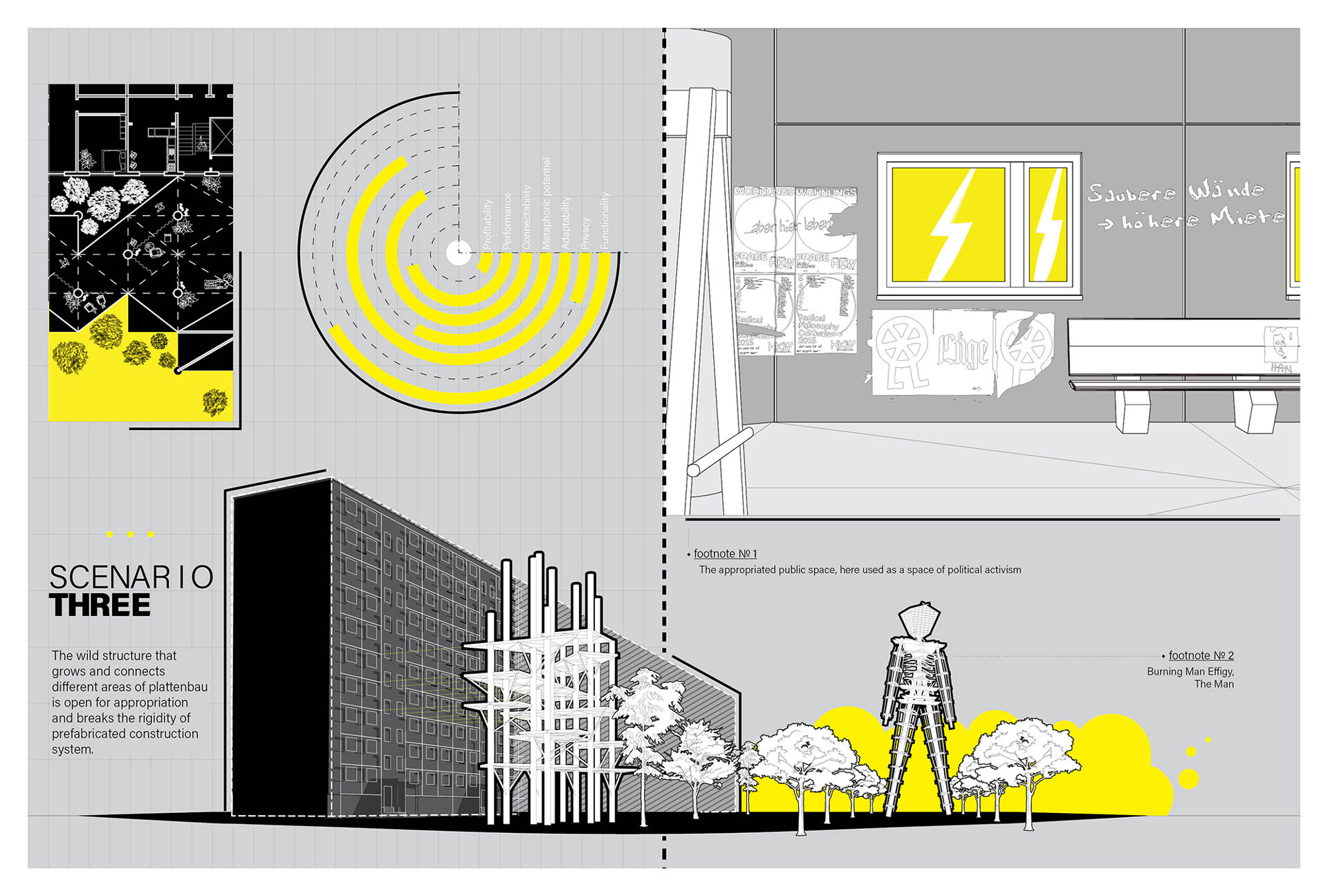