There is a widespread belief that portrays Venice as a fragile system that should not be disturbed, but the truth reveals that Venice is not born out of environmentalist’s visions. Already its first settlers running away from Lombard invasions and finding their shelter in rather inaccessible marshes, disturbed the natural balance. Venice, unlike any other city, is a metropolis built on water. It represents a completely new way of human settlement that is dependent on the state of the lagoon, that forces Venetians to defend it against any agent posing to disturb their marshy environment. On the first signs of any threat to the lagoon, be it from nature or from other naval empires, Venetians were already considering a solution. Alas, the lagoon is, in fact, a fragile system as mentioned, but as the first disruption was already made, every attempt on preserving the dreamed balance resembled a game of Whack-a-Mole. Fighting one problem would eventually open the way to new ones.
The research of the lagoon (former blessing turned threat) helped us outline the program of a science and innovation center on the island of Poveglia, that is located some 500m east from Lido on the confluence of two canals. The result is a research campus that deals with the problems the lagoon is facing and at the same time serves as an open-air museum that attracts visitors with the aim of raising the awareness of the climatic changes.
Through its history Poveglia changed its shape radically on several occasions in order to accommodate certain functions. It inspired us to create master plan, that would divide the existing islands into smaller units with the specific research centers on each one of them. We defined a couple of principles that lead further development of the master plan. One was to try to interweave different layers of usage of the island: the primary users (scientist), the public and the landscape. Our other principle was the credo to “show the invisible”, meaning that when talking about climatic changes we are talking about processes that are too slow in comparison to the human life and for many people they stay only abstract data, numbers and units. We wanted our buildings to communicate the topic they are dealing with, either by making the date visible or by giving the form to the natural force and turning into an architectural concept. ​​​​​​​ 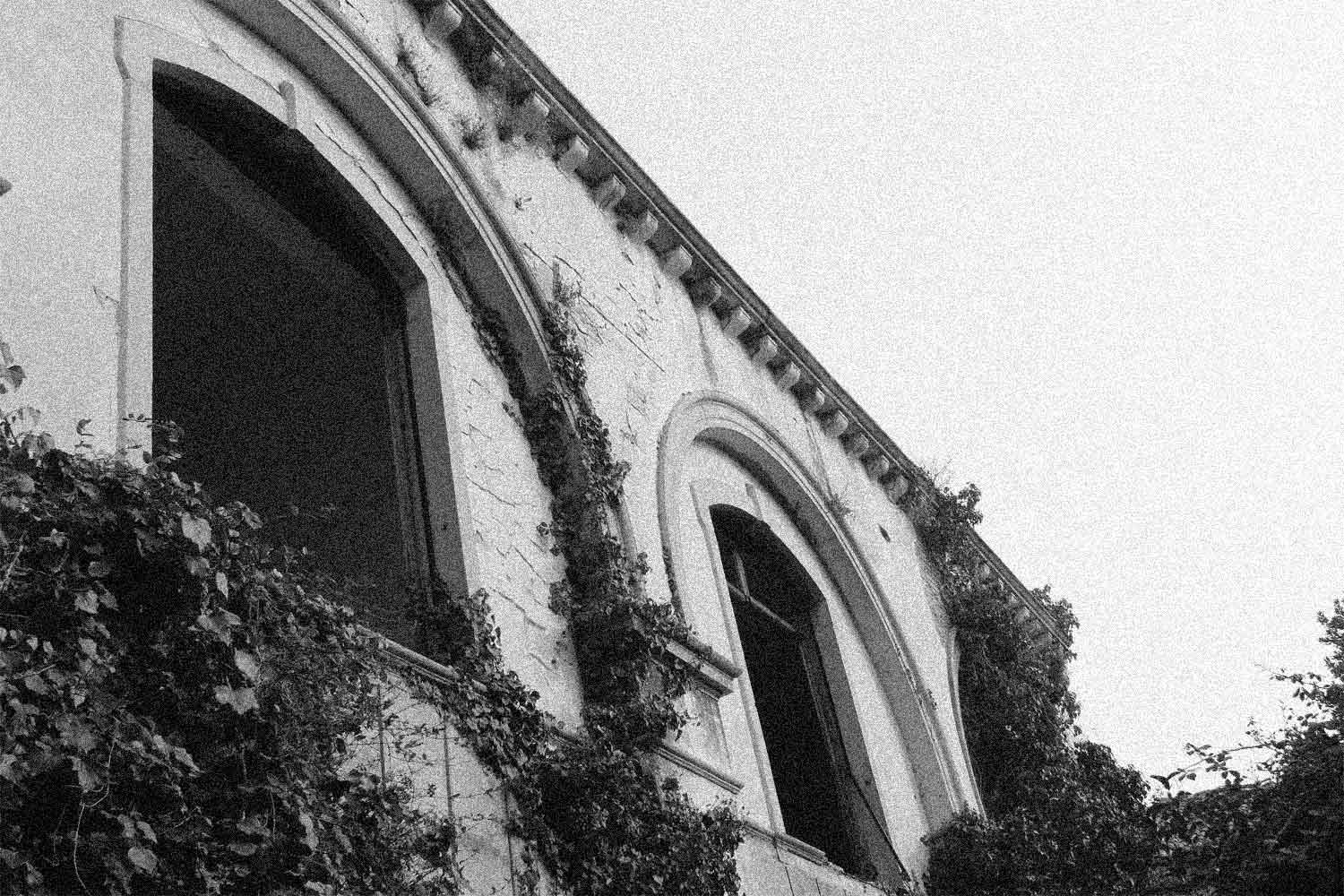 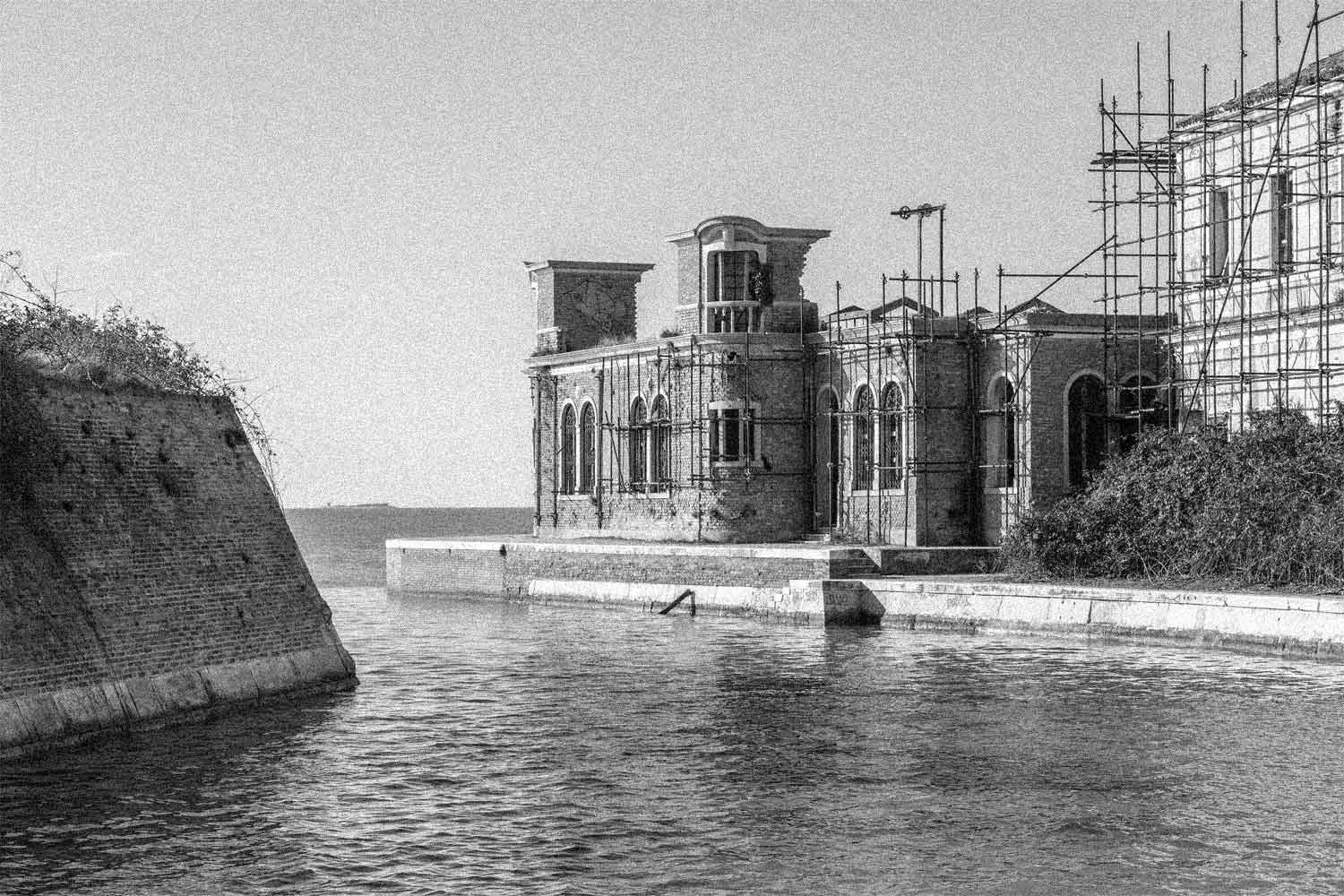 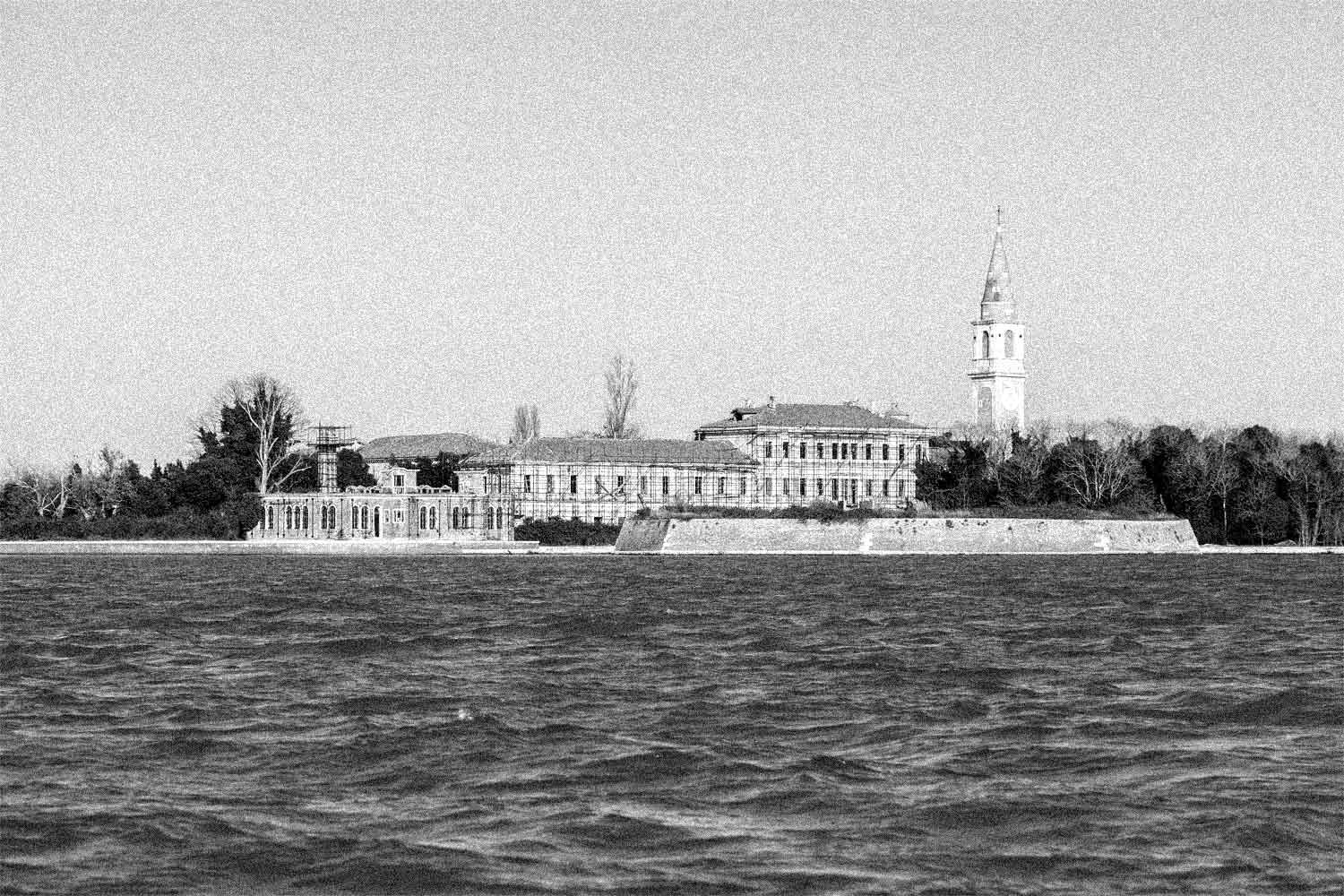 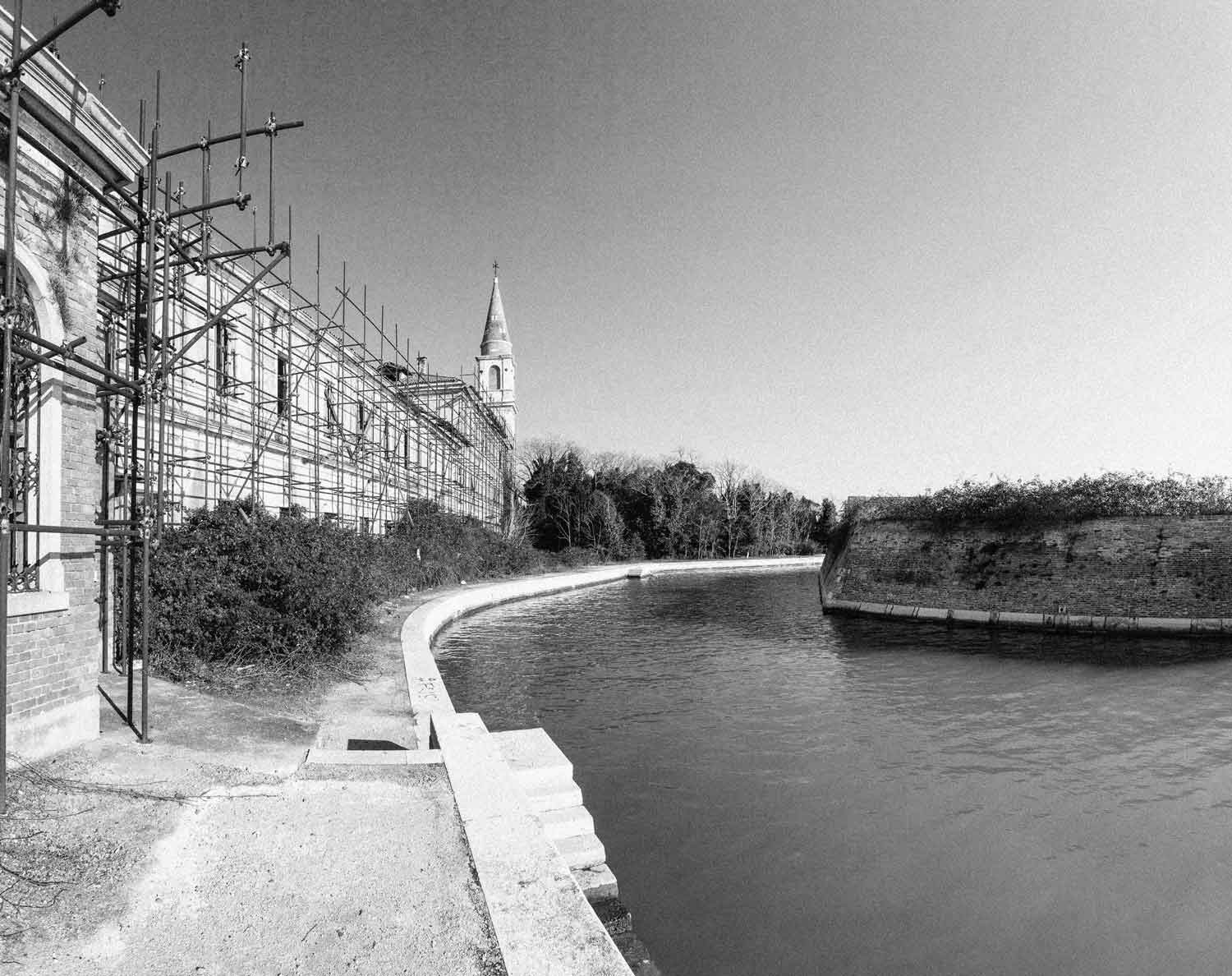 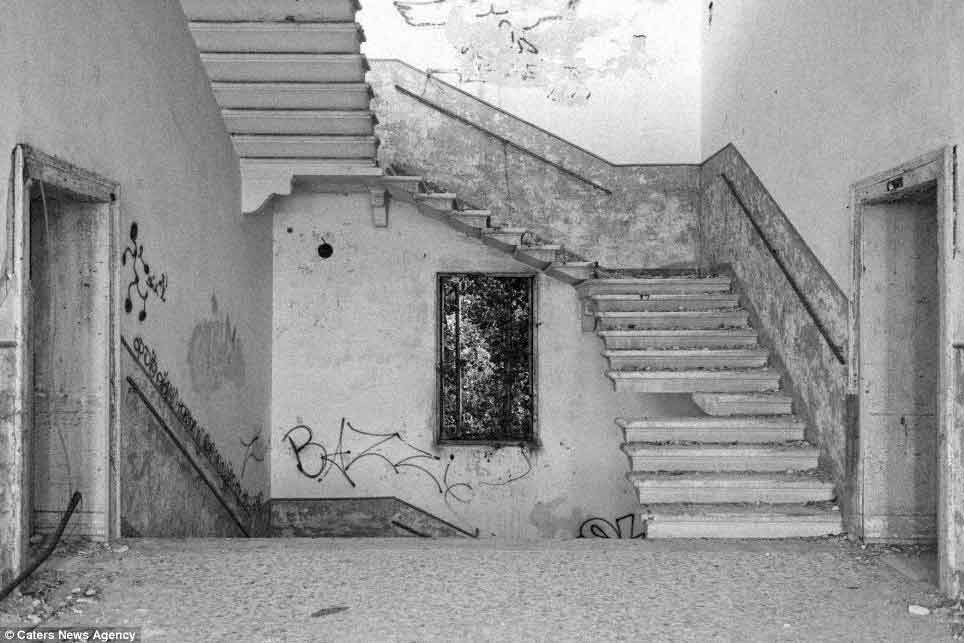 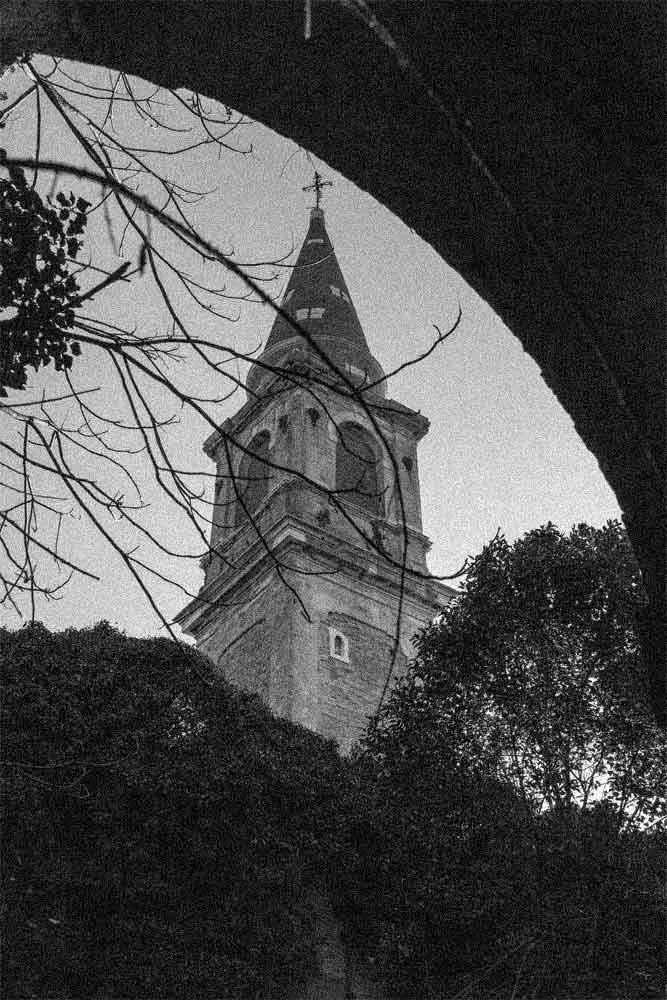 MASTERPLAN
From the research, we learned, that the problems in lagoon are not only a complex system, but also they are never solvable individually.
According to our master plan, we designed eight buildings, that have to be observed in the relationship with the neighboring buildings and as a part of the whole science and innovation center. Each building has been designed to answer specific program and at the same time the character defined by the issue it deals with: 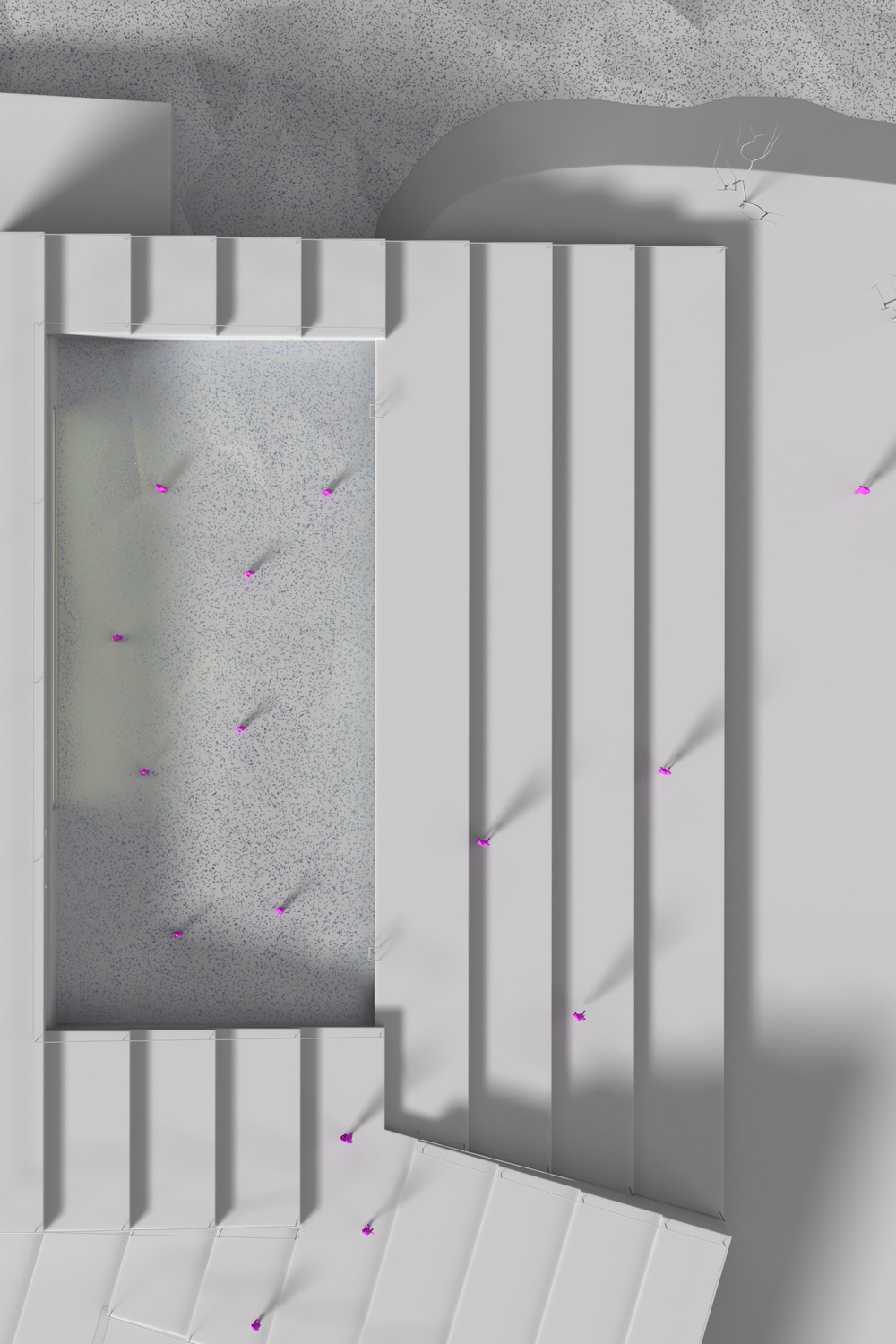 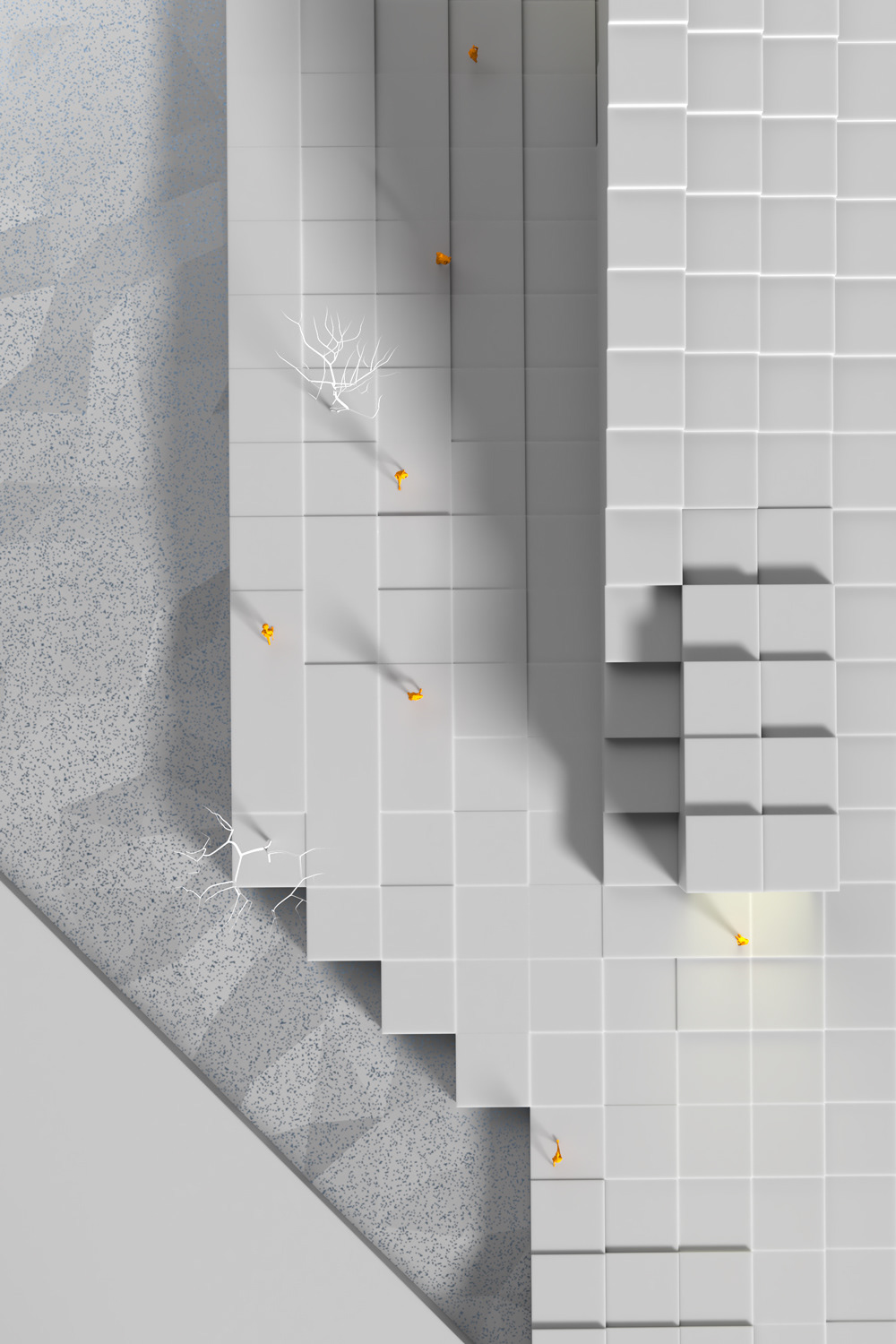 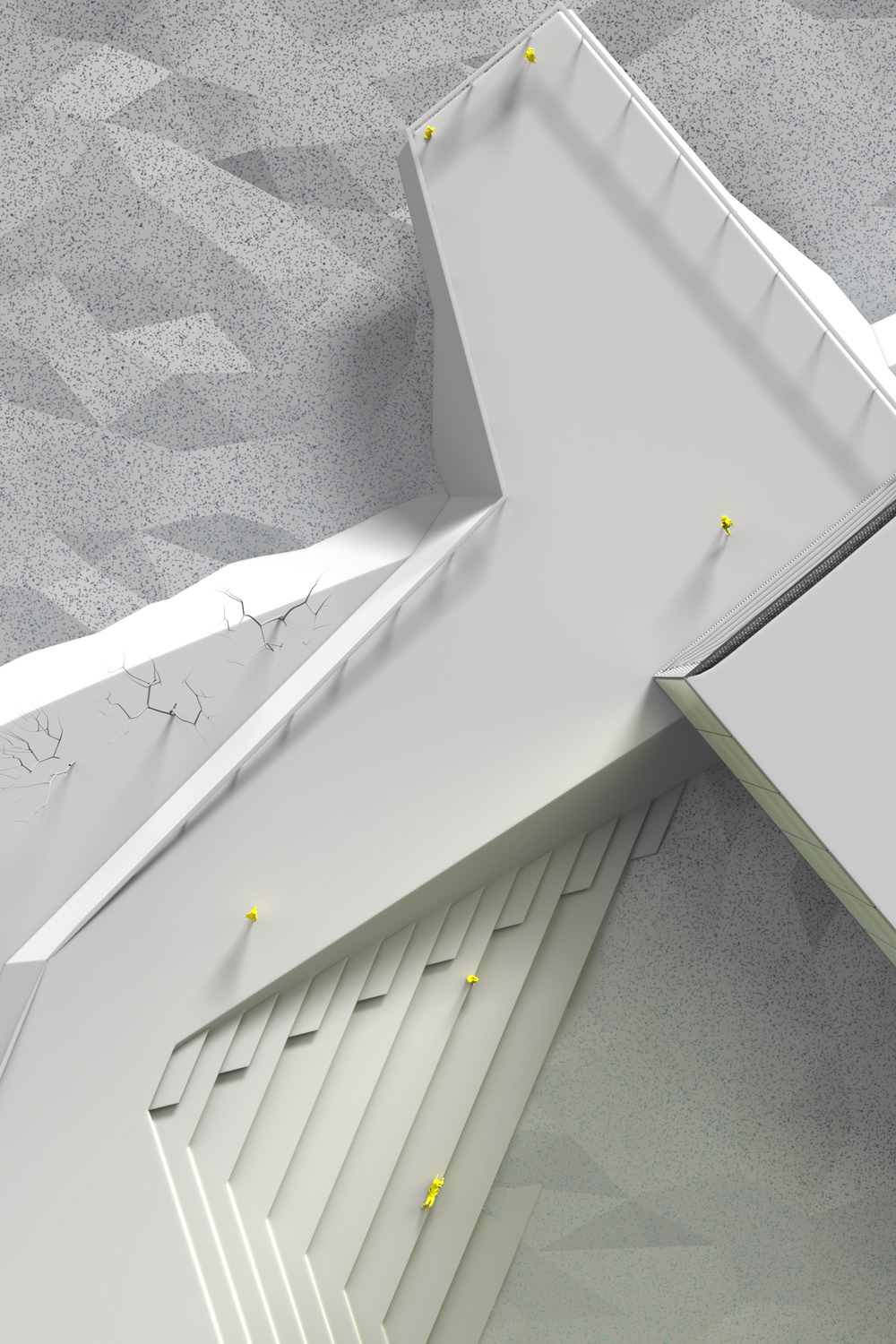 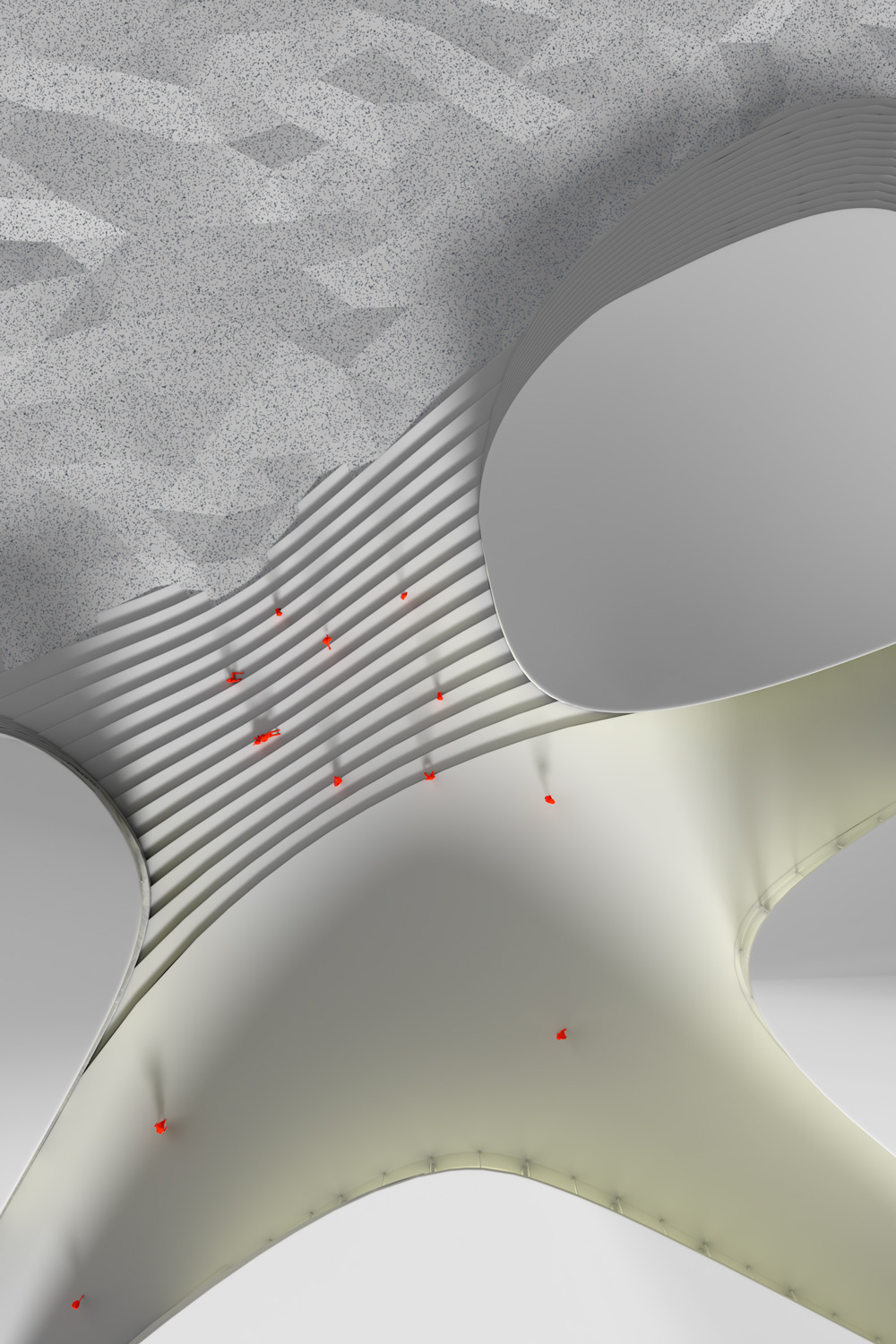 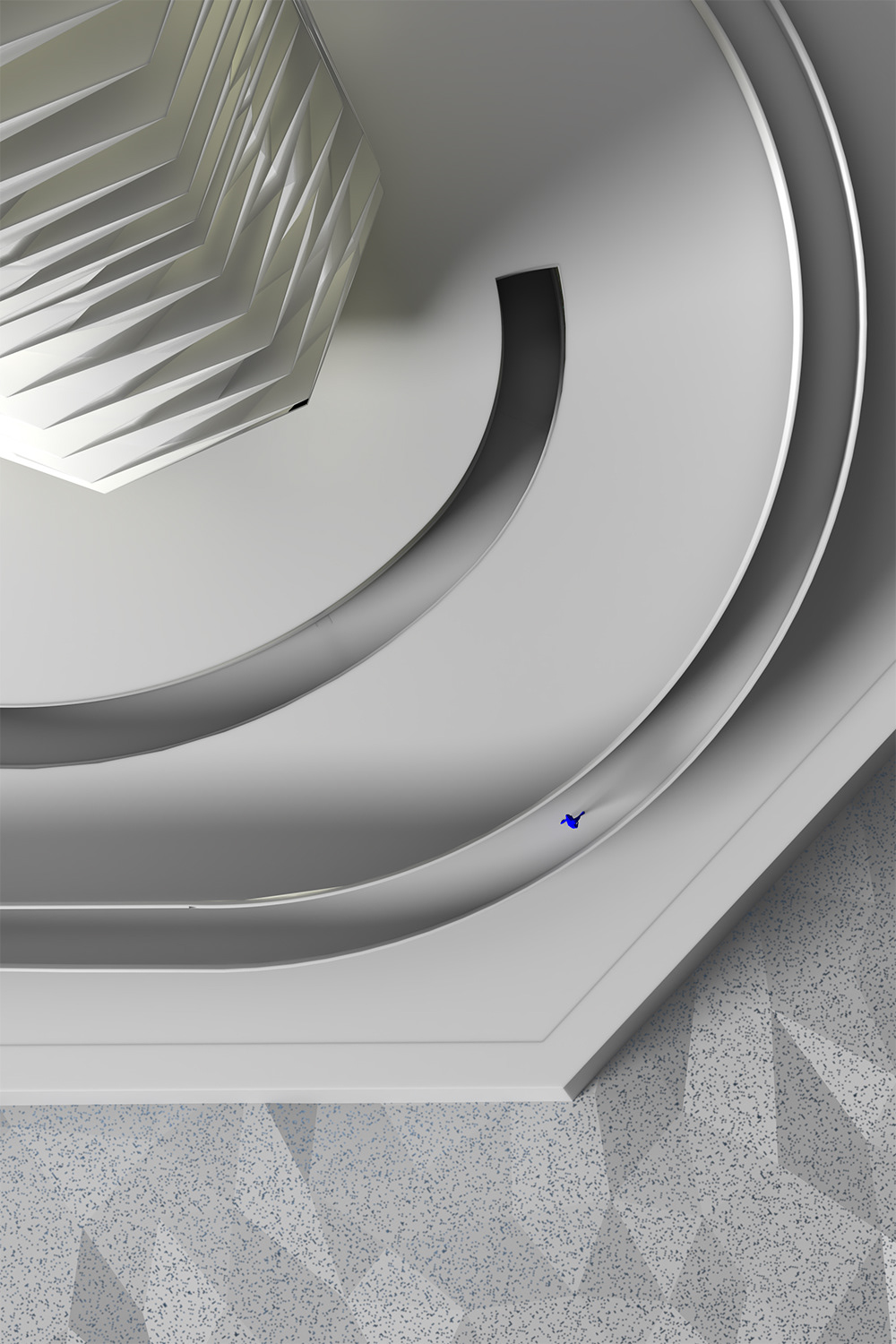 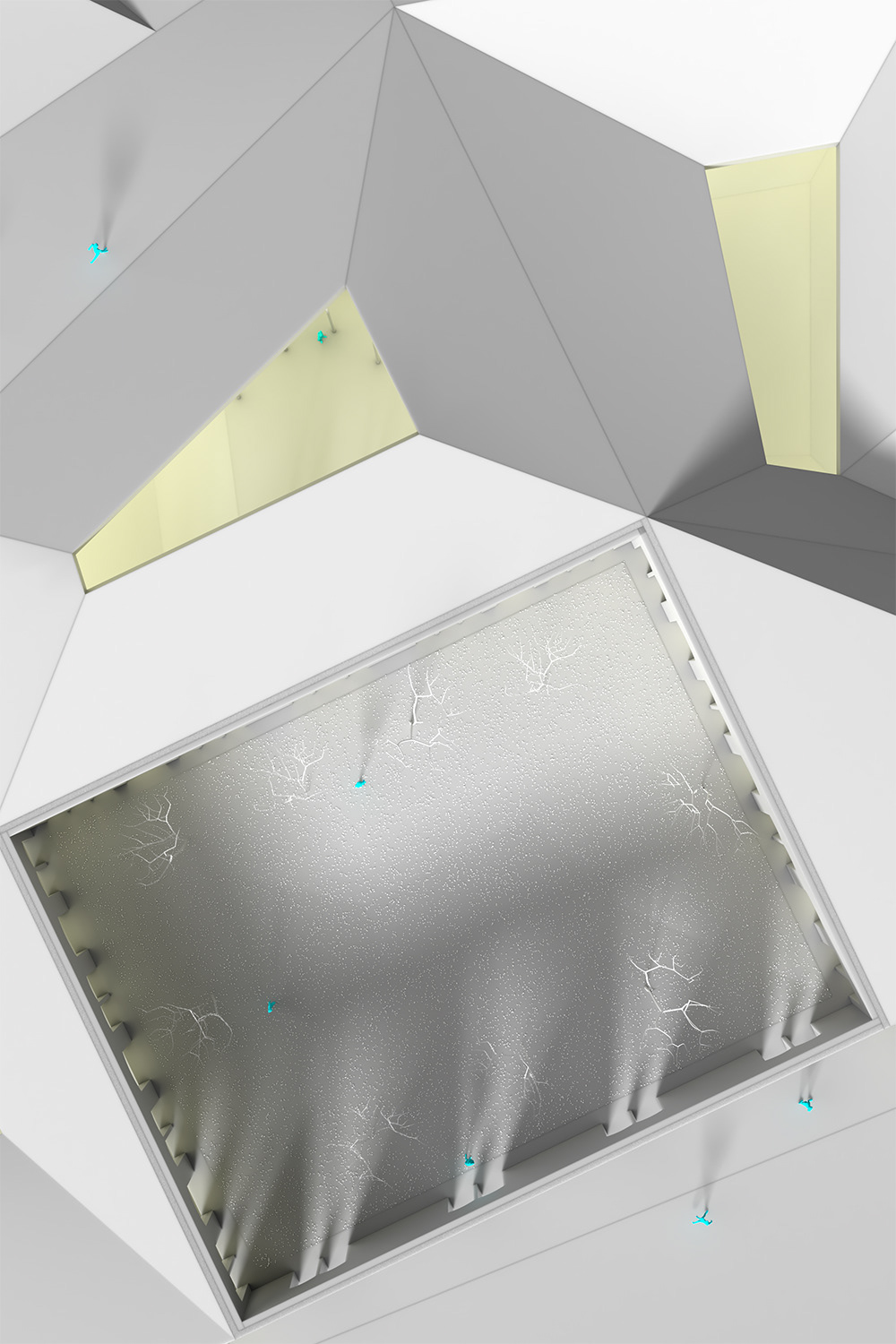 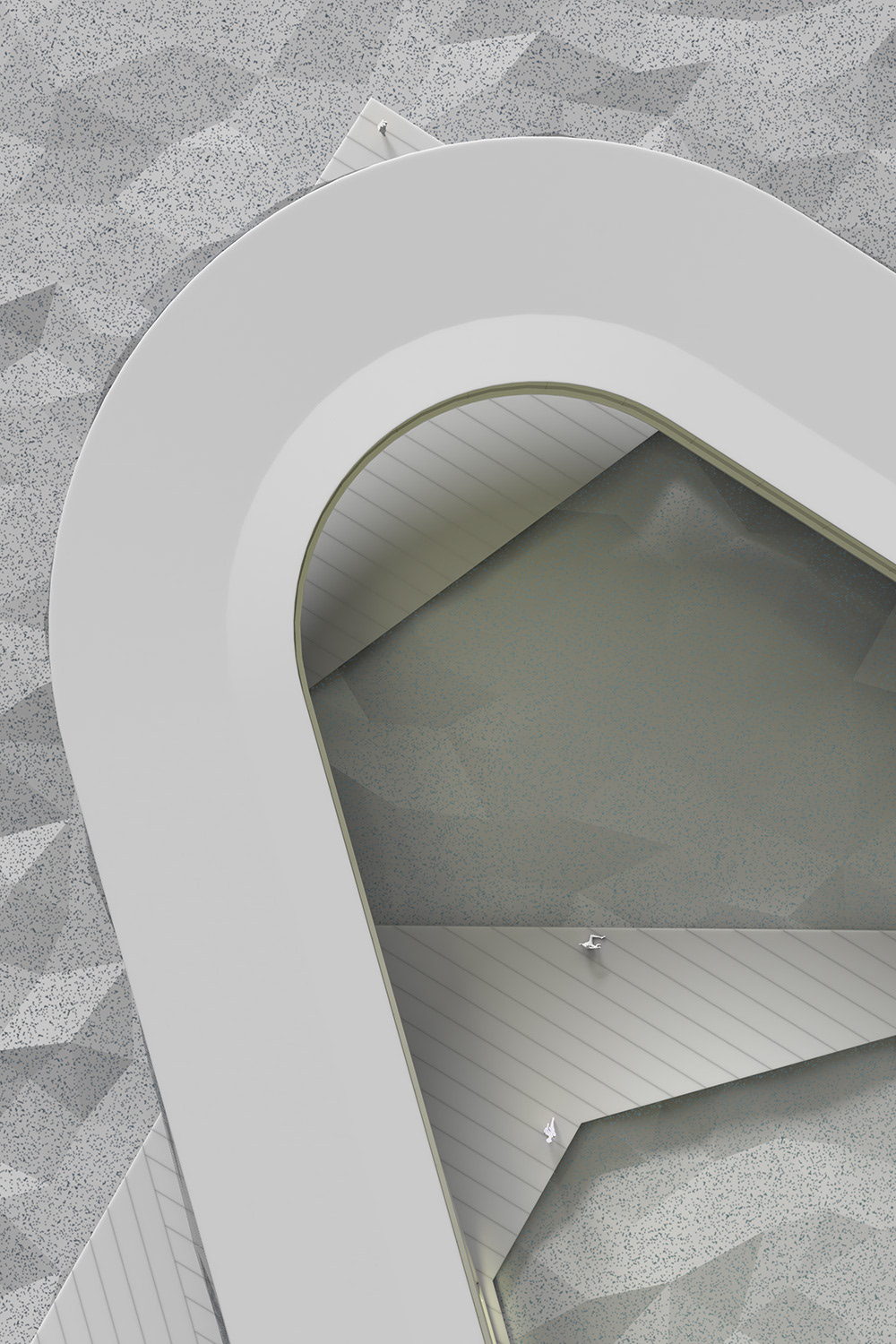 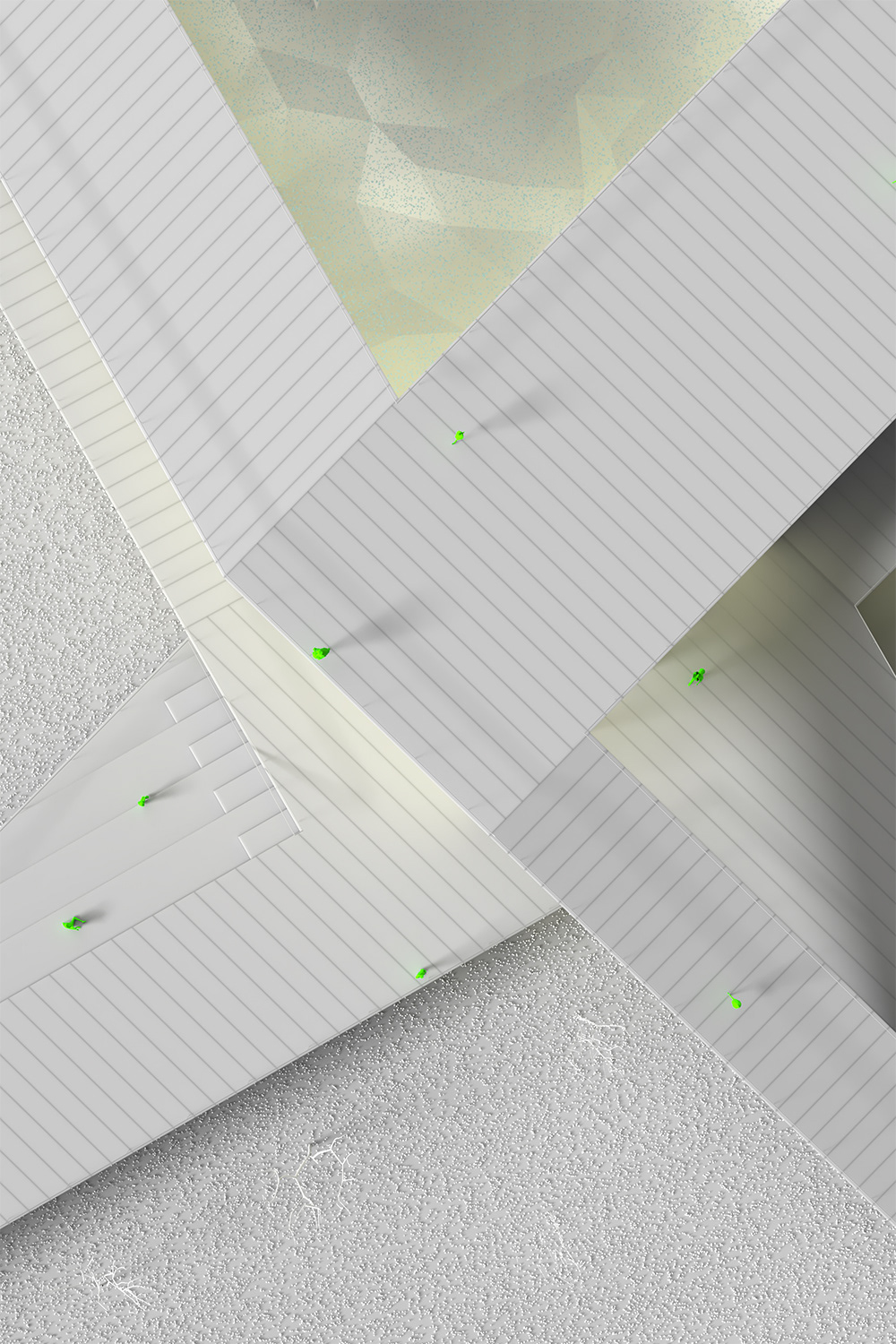 FRESH WATER
Water is a central point of Venice identity and the irony of it is, that even though Venice is built on water, it always had to invent new ways to provide fresh water for its citizens. Securing freshwater was an essential precondition to the settlement of Venice, and the construction of cisterns began as early as the 9th century. Over 6000 exist beneath the surface in Venice. All of the campi, or public squares, in Venice are graded to direct rainwater into cisterns, and all adjacent roofs to the campi are piped to drain runoff into the below ground cistern. Venice’s underground does not have easy to reach water tables. Up to a century ago, fresh water was drawn from the springs on the mainland and transported in casks to the lagoon by boat. This supplemented the traditional rainwater collection system built in the campi and campielli: it consisted of a wellhead and an underground cistern, filled with clean sand, with a waterproof layer of clay all around that served as a barrier against the infiltration of saltwater. The rainwater penetrated into the ground by means of collectors positioned around the well, located at slightly lower levels than the rest of the campo. It filtered through the sand down to the waterproof clay bottom of the cistern. The wellshaft, which was waterproofed by a layer of clay spread along its entire length, filled up from below with the collected water, which had been purified as it drained through the sand. In Venice cisterns where not only water collectors but also communication areas, where people drank water and came together. The whole mechanism of water collection was never purely a technical but it became a central point of daily life.
The earliest urban units of Venice were parishes, that were defined by a well in its main square. What agora was for greek polis, we can say that was campo to Venice defined by a church, a well and an access to the canal. It generated the daily life and served as a backdrop for the production of social relationships. With the recent climatic changes, raise of sea level and sinking of soil the wells became obsolete. They don´t represent the fight for water collection anymore, but rather they represent the square itself.
On the part of Poveglia that hosts the former hospital buildings, we decided to design a complex that would serve as central part of aequi.venice project. After the survey of the current state of existing buildings, we made a demolition and preservation plan that created a new context for the program that requires large open areas. Inspired by the idea of the wells in campi into which the calli and rainwater flow in, we decided to employ the whole area of the island to collect fresh water. The space connects the existing buildings that are repurposed and paves the way for the rainwater. We present the collected water as a defining element of the architecture. The water is collected into pools that create and define areas in the new structure. A folding roof landscape not only functions as a protection against natural elements but also guides the resource to its storage space. The visitor can literally follow the raindrop on its path to its final storage. On the way it passes several filter layers of gravel, to purify it. 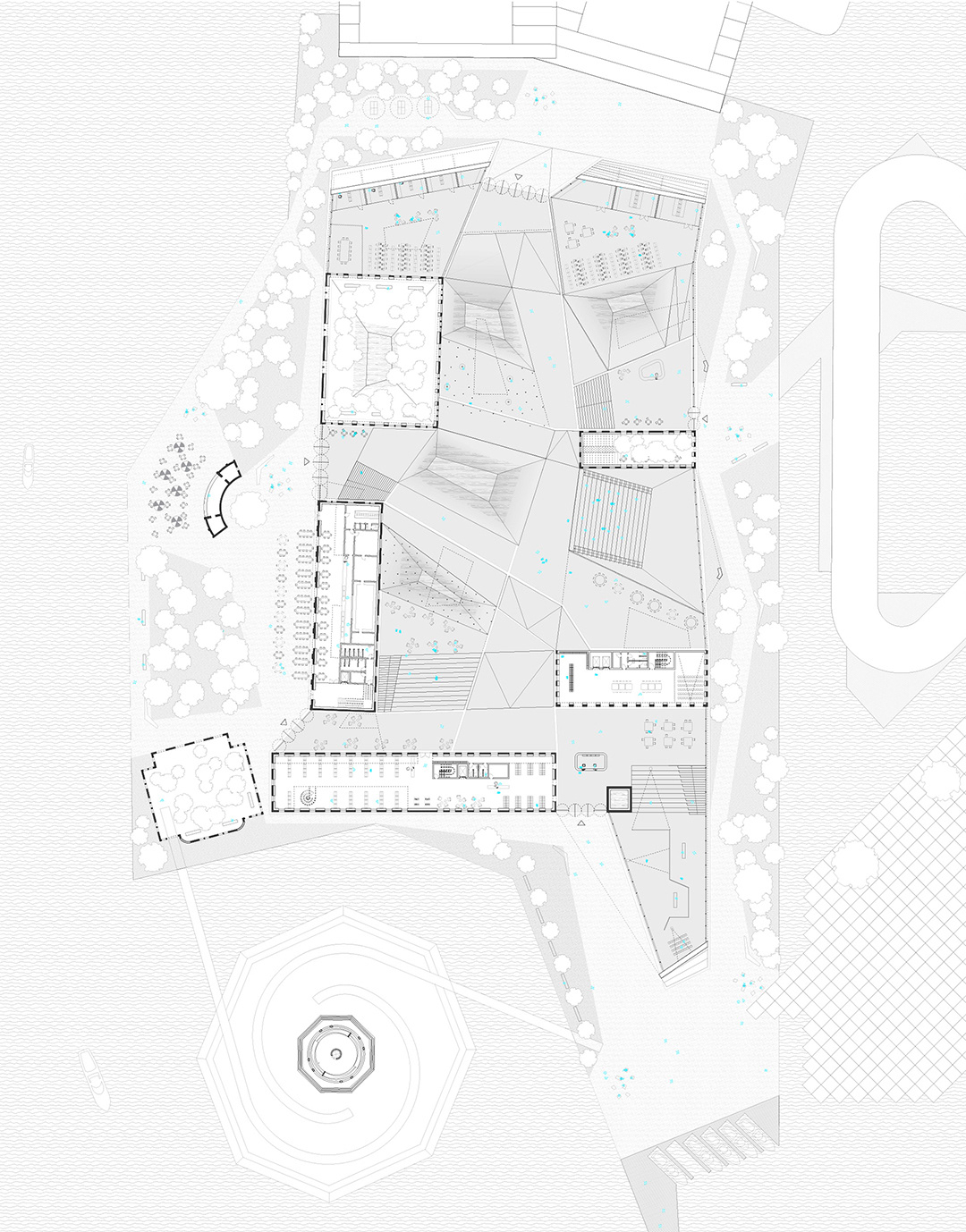 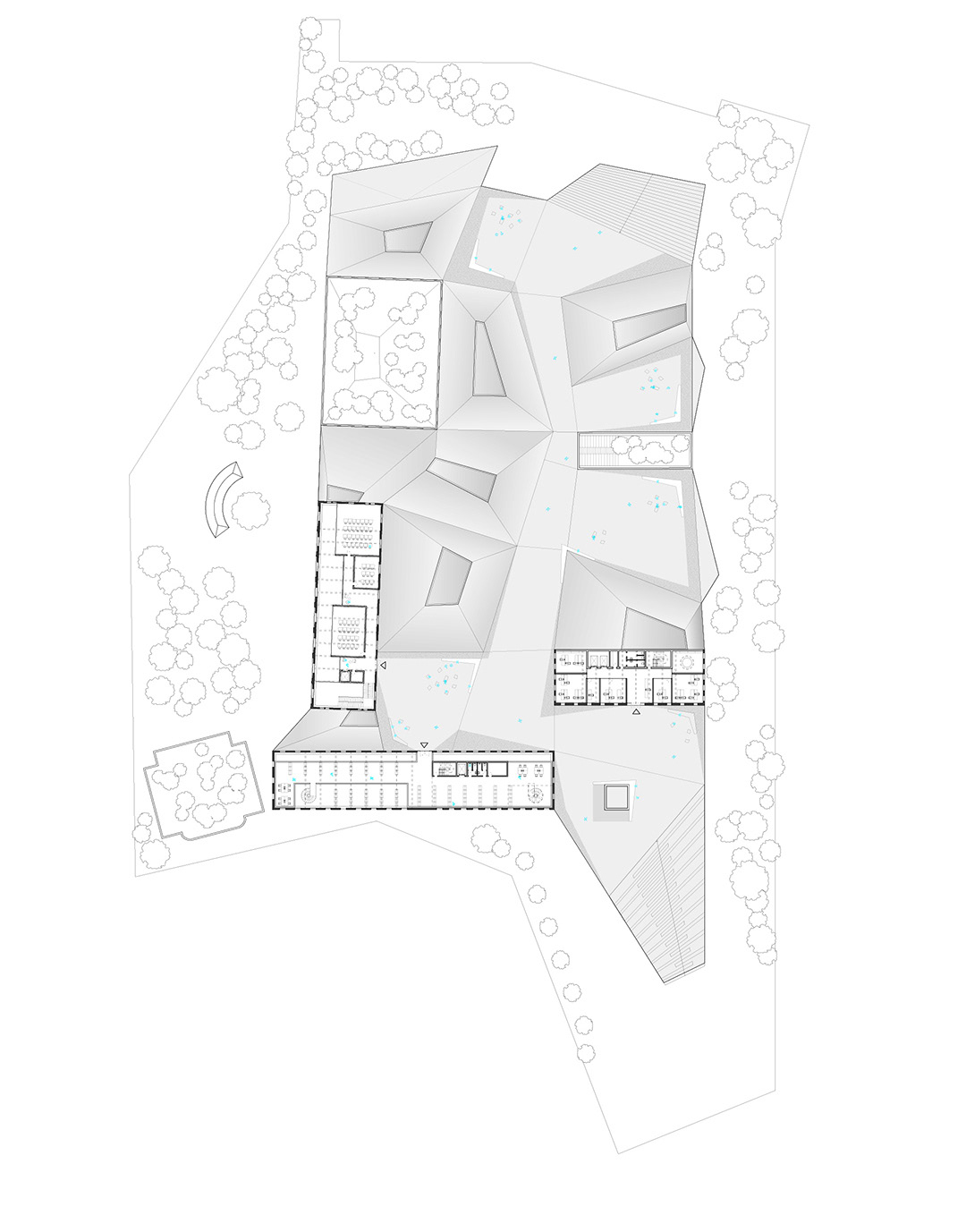 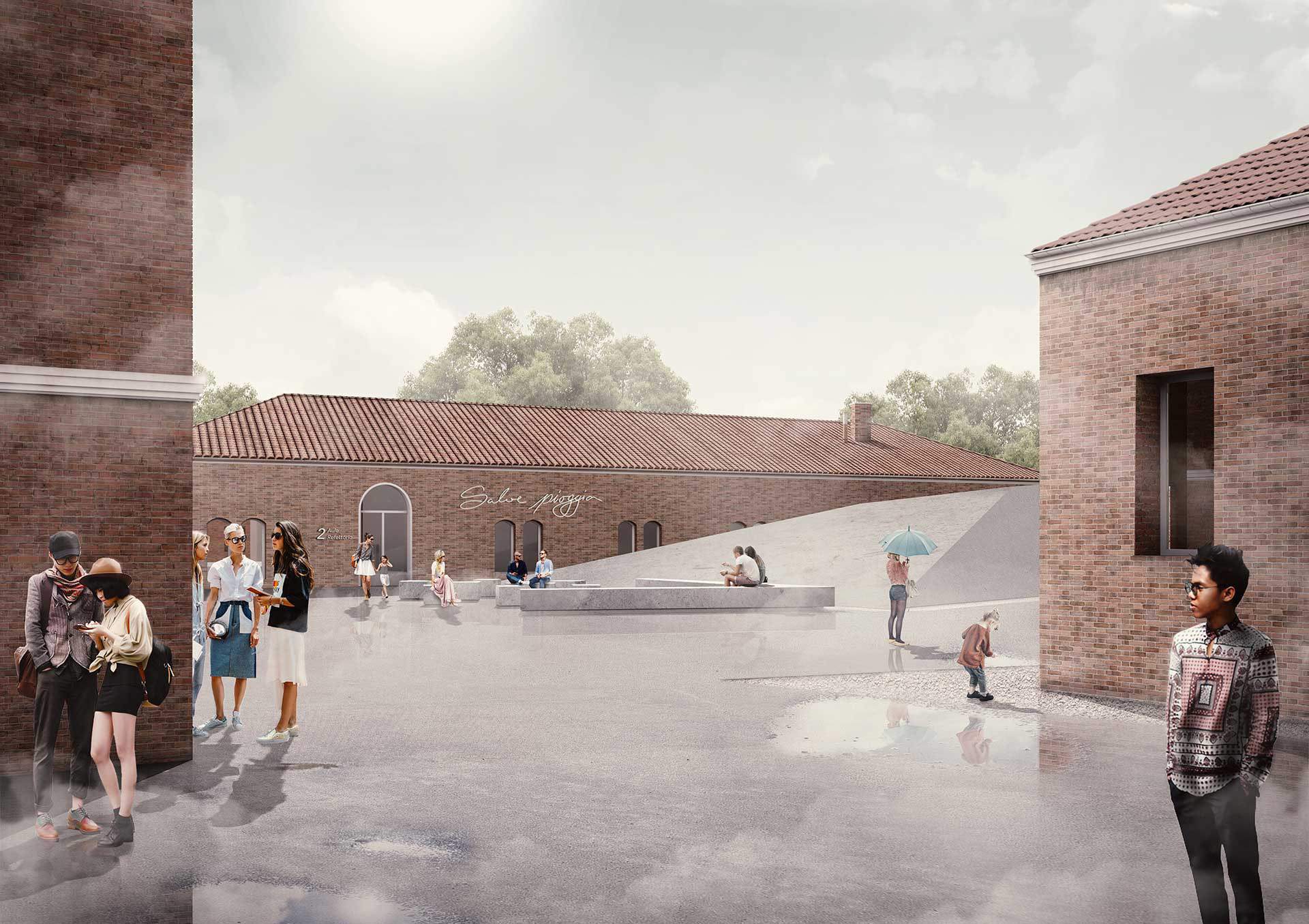 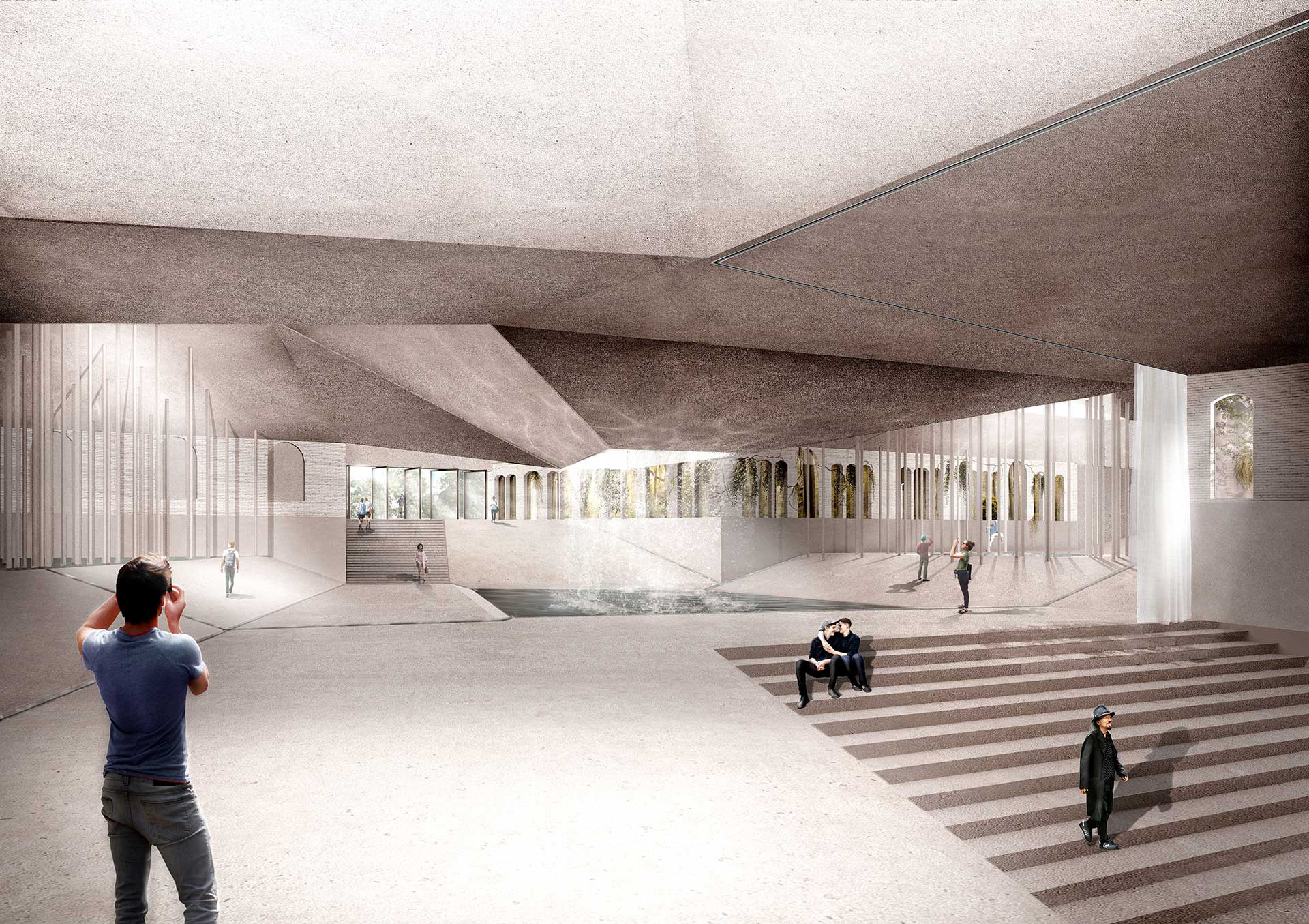