13 MORGEN brings two extremes together. On one side there is a desire to achieve nutritional autarky through agricultural density in a suburban context. On the other side, there is the Bar, linear urbanity that connects all the fields and the houses; it distributes the vegetables and serves as a communal centre. It is non-stop space that embodies all the regrets of those who left the city for a suburb, hedonistic compensation for dropped sweat in the fields.
With the exponential growth of urban population, cities are becoming more and more unpopular among the urban dwellers who are affluent enough to choose how their habitat will look like. Projects that are offering a piece of suburban idleness in the dense and noisy city centres are popping up all around us. They are deconstructing the city with their design strategies, such as isolation from the street level, restricted accessibility and perverted sense of neighbourhood and community. These anti-urban tendencies are nothing new, they are only amplified with the rise of creative class, that wants to leave the city, yet again they don’t want to leave their café, but want a dog or two, but they want to walk to their gym and spa, but still they want a garden, but want to watch Tarkovsky in indie cinema, but all that crowd and traffic jams…
We imagine this creative class that is sick and tired of hectic urban life and the fact that their food is not bio enough, yet never gathered enough courage to escape and look for their own bliss somewhere away from the city… we call them the Agrinauts and 13 MORGEN is the place that fulfils their desires.
UNDER After conducting a research on required amount of land sufficient to feed a vegan family of four, the land is divided into three zones: green areas, row houses and agricultural zone. Every field is used for only one specific vegetable culture in the amount required for a year. The work is communal and creates a basis for a neighborhood of farmers working in the same field. These monocultures combined would produce the desired amount of vegetables for the whole population of 13 MORGEN. Each neighbourhood is provided with storage area for tools and harvest. The vertical connection to the Bar is located in these communal hotspots.
OVER Hovering the agricultural landscape, the Bar is city surrogate for all the Agrinauts. It could house a 200m swimming pool and spa centre, cafés, arthouse cinema, state of art system of food distribution, first ever Michelin-star communal kitchen, glasshouses for exotic plants, music venue, Waldorf kindergarten, yoga huts, international magazine library and Pantheistic prayer complex. Here they can find everything they think they are losing with moving out of the city, but the truth is they never had it. 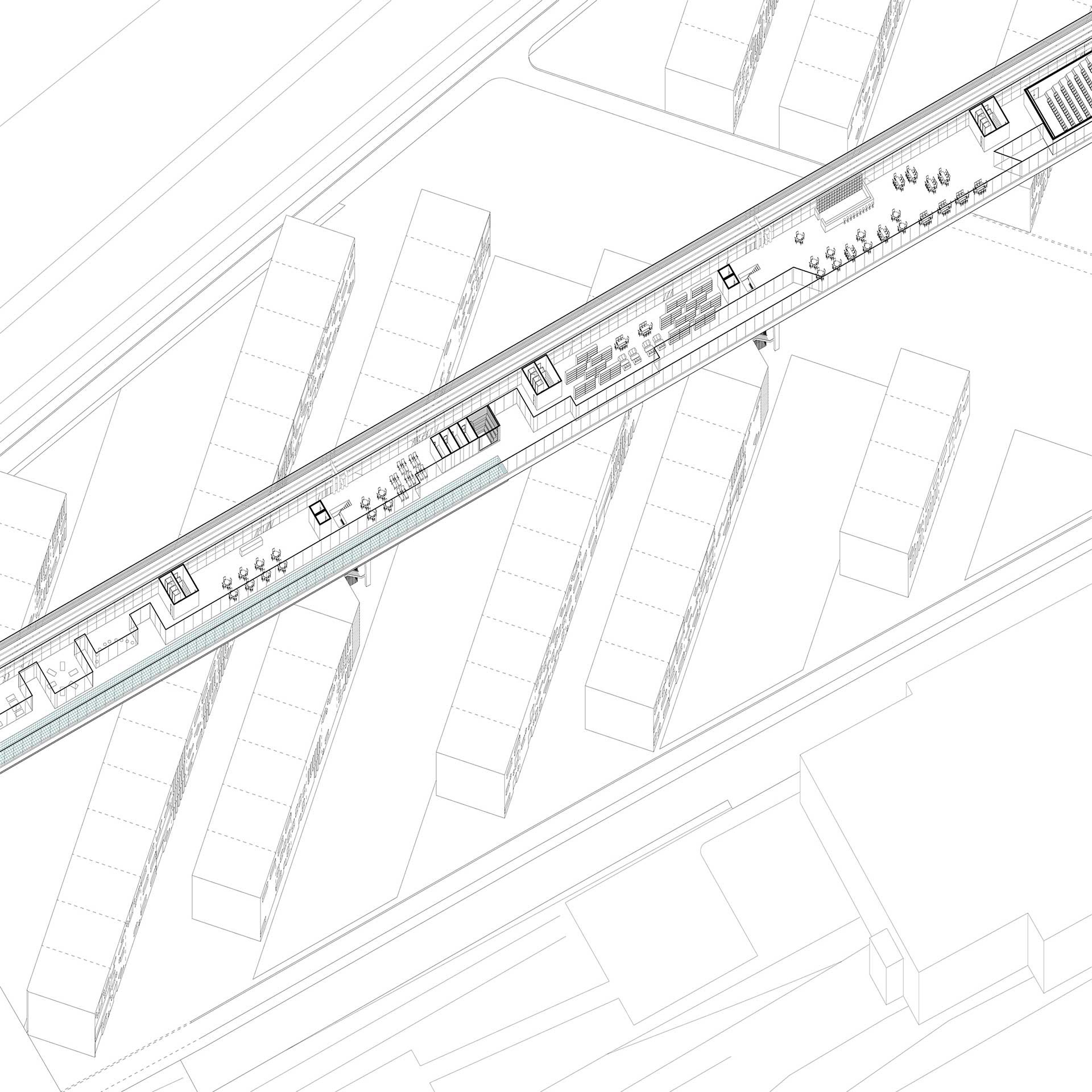 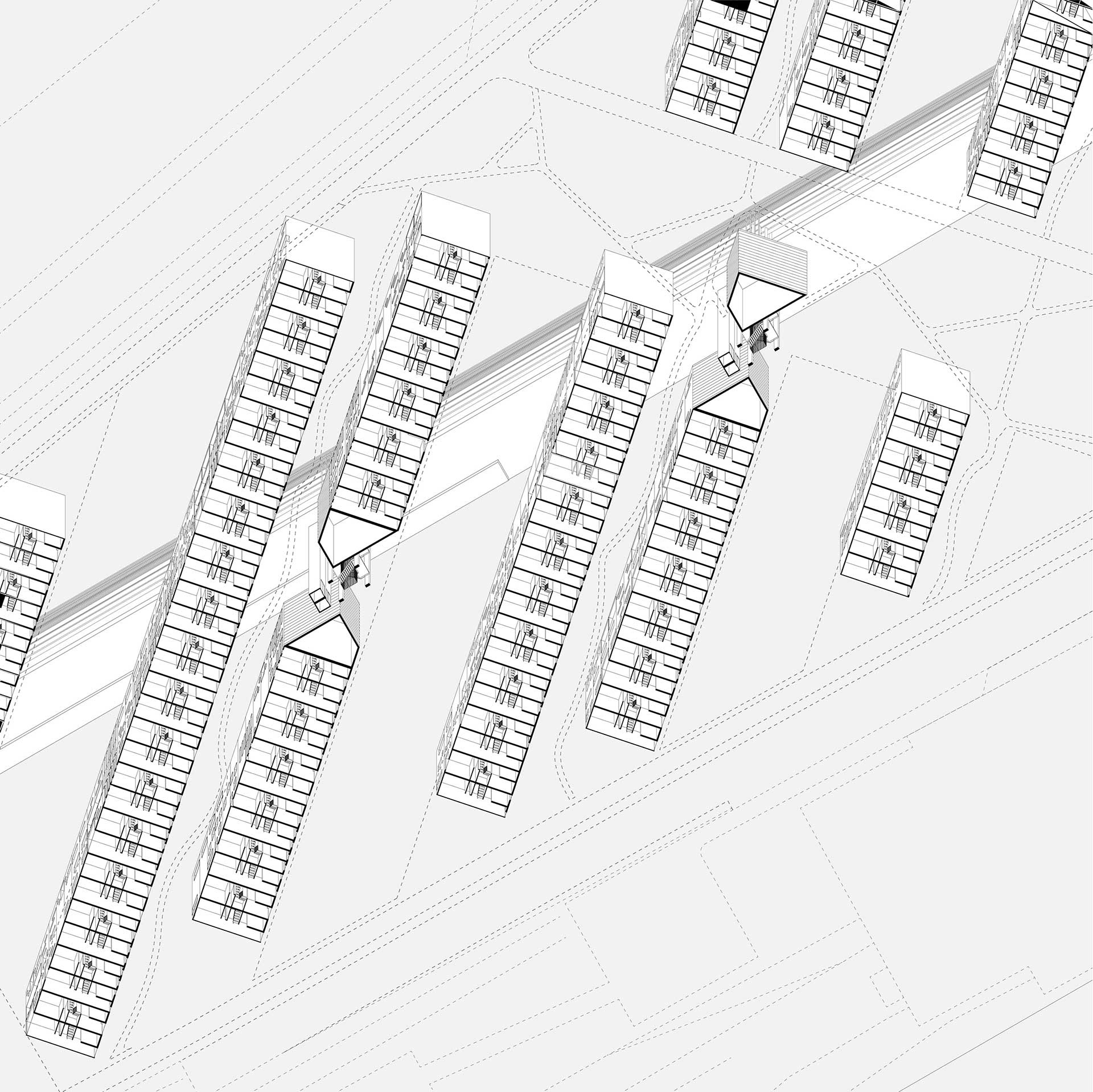 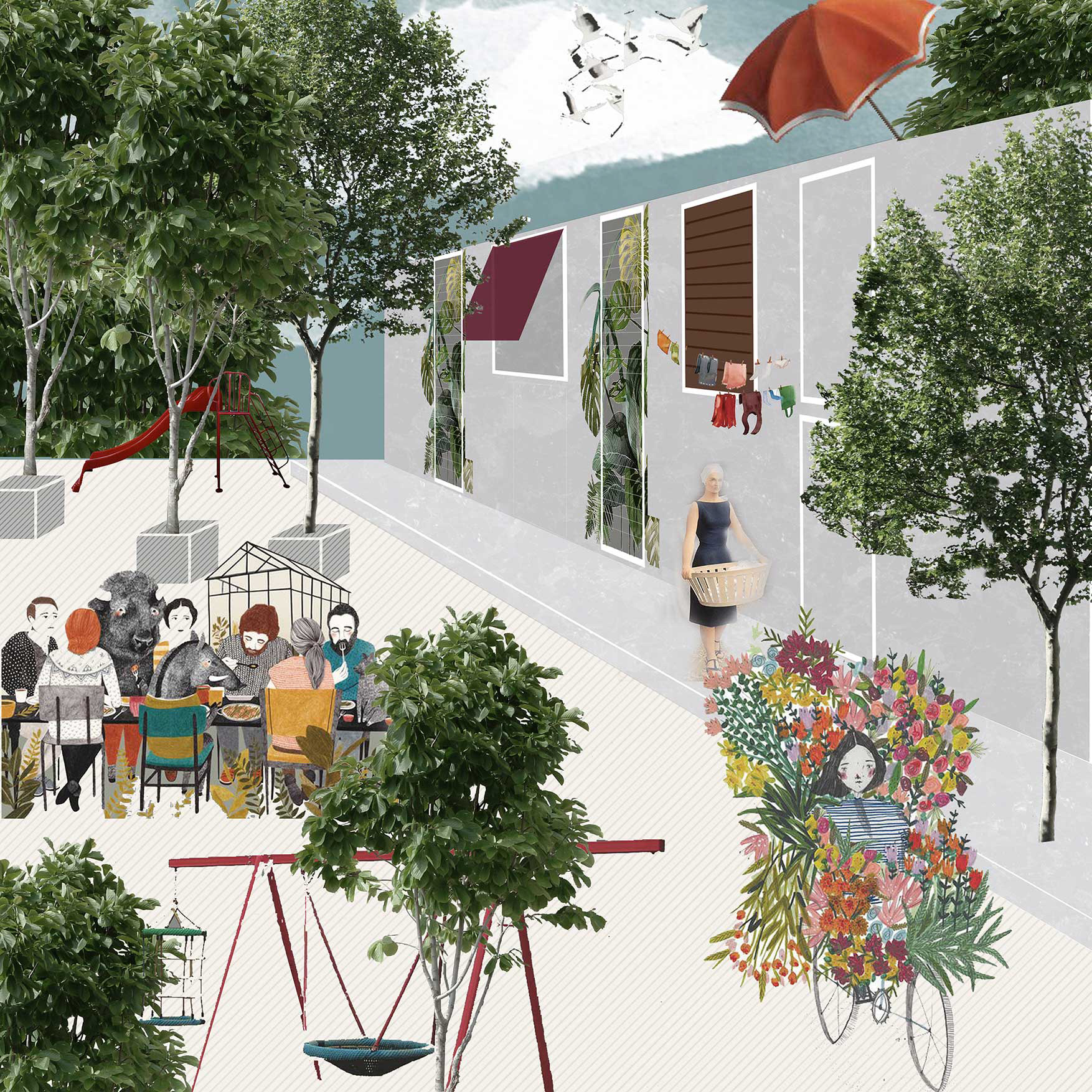 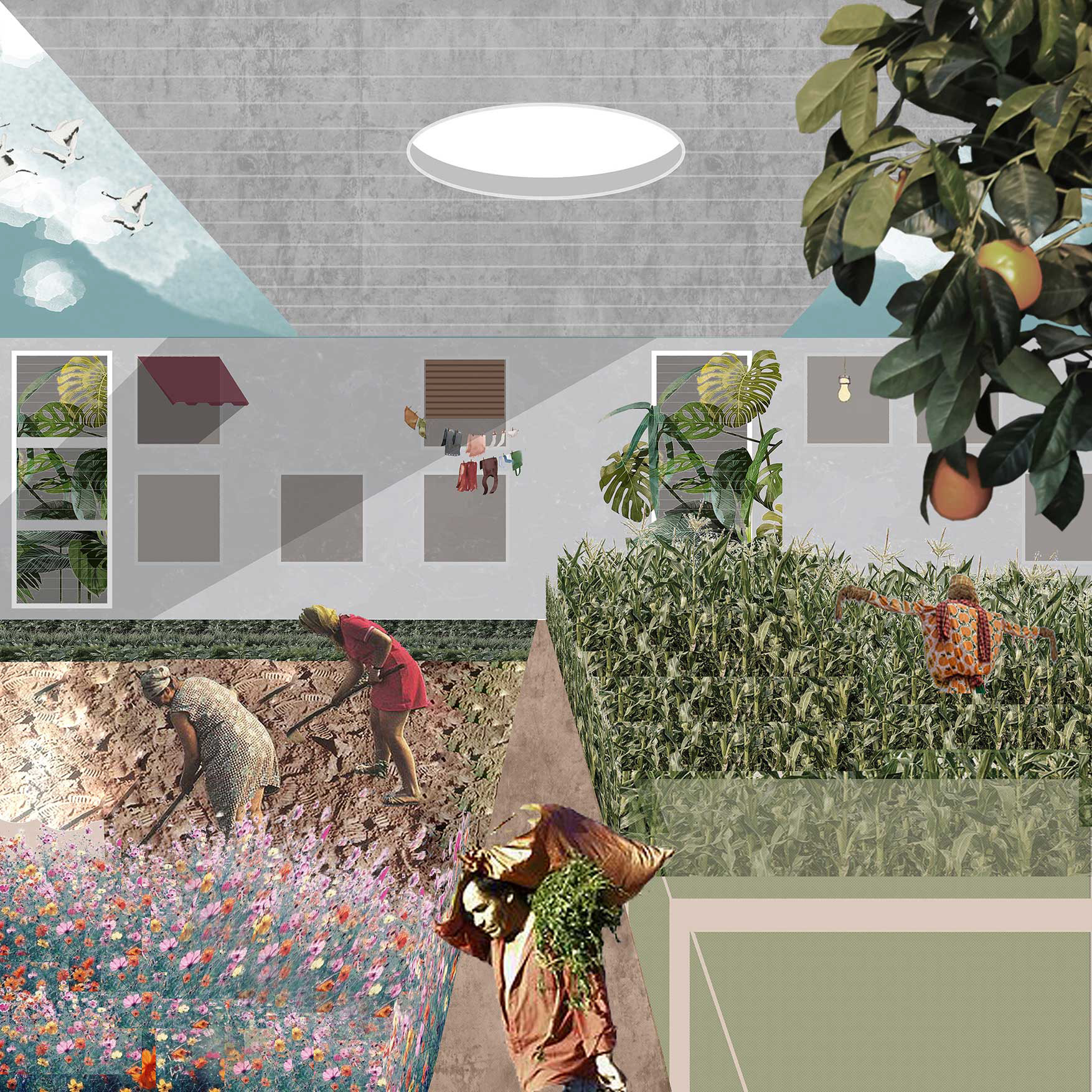 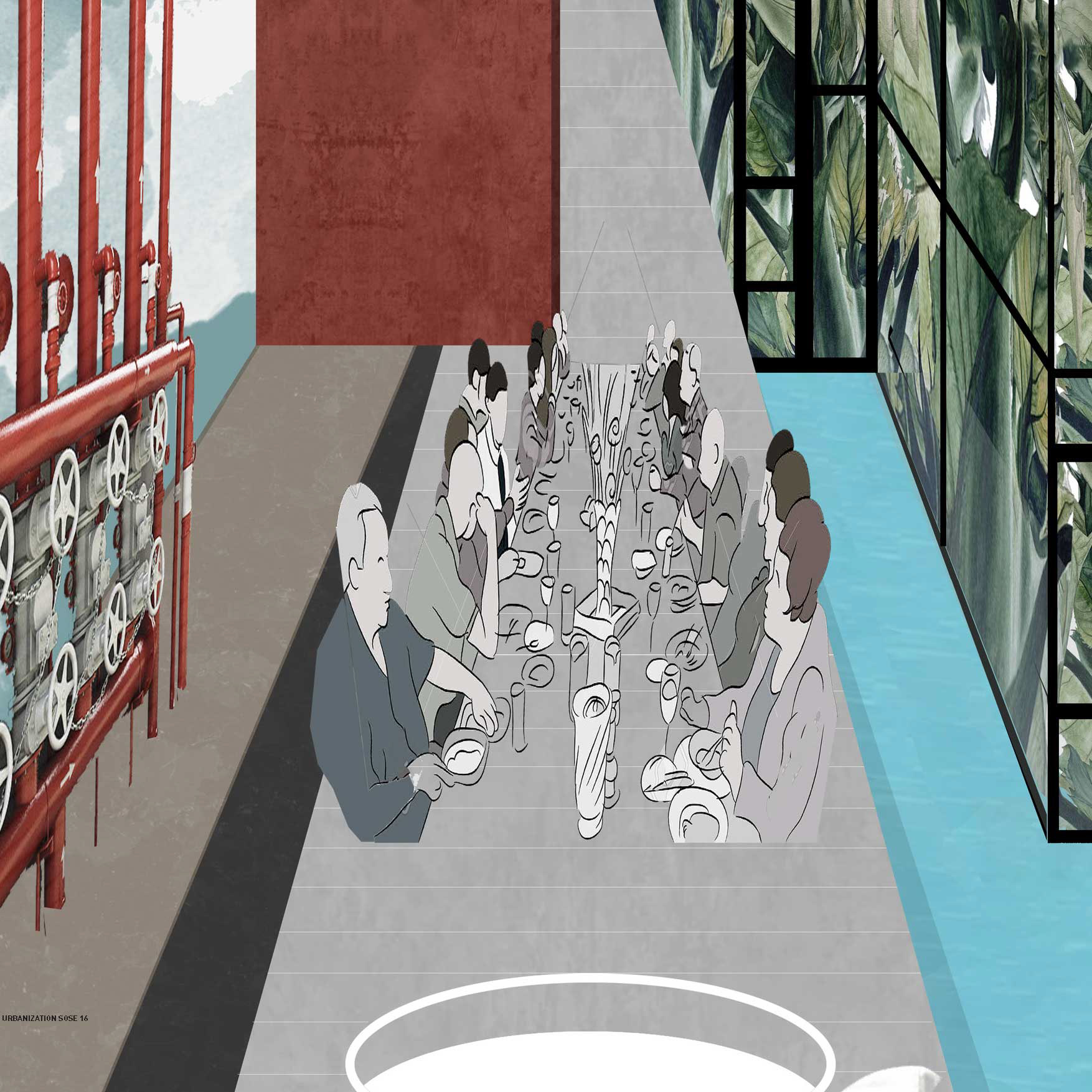